June 13, 2013
These looks failed to inspire during the 2013 Roland Garros tournament.

Gael - this shirt is hideous. I don't even know why, because I like the colors and stripes - but just terrible. Quel horreur!

I can't fathom which company would think that the French would accept tie dye. What were they thinking? 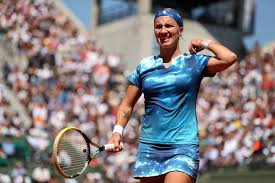 3. Sloane Stephens - Double Fault
Neon green/yellow works well on blue hardcourts but it was jarring to see the color against the terre battue. Also, the outfit seemed way too short for Sloane. 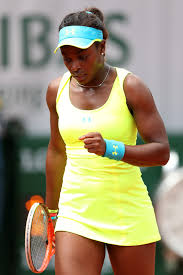 Not a fan of the 90s baby doll/slip dress look that Maria's been trying to rock. The little triangle detail on the straps also seem antiquated. But hey - Sugarpova's laughing and shrieking her way to the bank.

I usually like Vika's understated and un-complicated Nike kits but this one didn't work for me. I get that she's in the same color palette as Serena - but Vika just ends up looking washed out and dull against the clay. 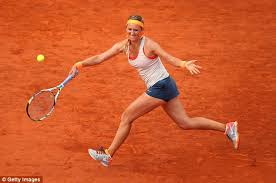