Barring a bout of nerves, Serena is the presumptive French Open champion.

Definitely glad that she made it to round 2, unlike last year. She had such a great bandage-dress inspired kit which got no traction due to Serena's early dismissal from the 2012 Roland Garros. 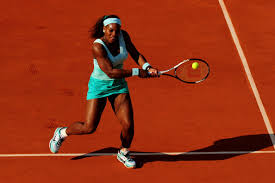 August 24, 2018
Well...it's been 2 years hasn't it. That's what heading to grad school will do to a person. Sometimes the axiom, 'the more things change, the more they stay the same,' rings true. But sometimes, as with the case of the US Open's new logo, one steps away, and comes to find that things have gone completely awry. Is this Arial font? Are these letters lower case? Really, in this political climate, lower case US? Is lower case an affront to becoming great again? Also, is this logo actually in Arial Italics? According to the USTA, "t he logo created by renowned graphic design firm Chermayeff & Geismar & Haviv, is a streamlined and modernized version of the tournament’s iconic flaming ball logo, which was first introduced in 1997." The old logo had a solid 20-year run. This logo probably won't make it this long because it lacks pizzazz and lacks the distinction the previous logo offered.  And here's a look at an earlier
11 comments
Read more

January 10, 2015
GlamSpinTennis was thrilled to hear from Fila's marketing rep to get the scoop on Fila's 2015 Australian Open Platinum Collection.  According to Fila the " Platinum collection features INVISTA’s THERMOCOOL ™ fabric, designed to optimize the body’s natural thermal capabilities through smart fiber cross-sections: Duoregulation ™ adapts to the wearer’s needs." On the women's side, Jelena Jankovic , Julia Goerges, and Vera Zvonareva will be sporting the platinum designs which feature pink accents in both Jelena's and Julia's kits.  Francine Candiotti , Fila's tennis design expert explained exclusively GlamSpinTennis (by email), that the "diva pink" highlights were selected "...as an invigorating, luminous color that would flatter all skin tones."  Jelena Jankovic "This playful feminine pink was paired with white and shadow black. We used THERMOCOOL™ fabric in this collection, which absorbs the color beautifully!
1 comment
Read more

December 16, 2013
Reports recently circulated indicating that Rafael Nadal earned $10 million in fees for participating in exhibitions throughout South America during to the 2013 off-season.  While the dollar figure hasn't been confirmed, the Nadal camp hasn't denied or corroborated the story.  This story seemingly flies in the face of the swash-buckling, pirate pant wearing, narrative that was spun when Nadal first emerged as a future No.1 in the mid-aughts. Nadal was the island boy who enjoyed staying home and going fishing with his amigos.  Times sure have changed! According to Forbes magazine, Rafa has earned $25 million from his off-court deals and activities.  Let's take a look at Rafa Nadal Inc.: Agent & Agency Rafa is repped by Carlos Costa, a former ATP player who earned 6 singles titles while on the tour.  Carlos and Rafa initially joined forces around 2002 under the super-agency, IMG. Carlos also managed David Ferrer, but now concentrates solely on Nadal,
1 comment
Read more